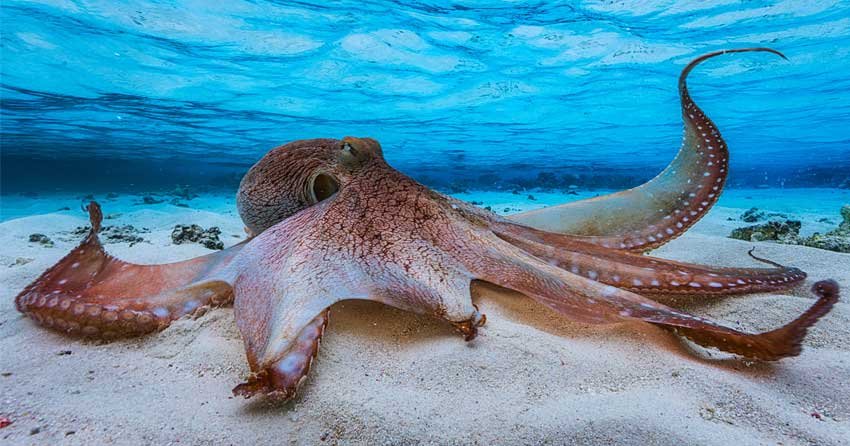 Octopuses are ocean creatures that are most famous for having eight arms and bulbous heads. Some other fun facts: They have three hearts and blue blood; they squirt ink to deter predators; and being boneless, they can squeeze into (or out of) tight spaces. They are quite intelligent and have been observed using tools.
And sadly, for them, sex is a death sentence.
Description
The order Octopoda includes 289 species. The word octopus comes from the Greek, októpus, which means "eight foot".
Some people call their appendages tentacles, but that is incorrect; they are arms. Most octopus species have suction cups on the bottom of each arm. The arms seem to have a mind of their own. In fact, two-thirds of an octopus' neurons are in its arms rather than its head. That means that an octopus can focus on exploring a cave for food with one arm while another arm tries to crack open a shellfish.

Some octopuses even have warts. Two deep-sea octopuses in the Graneledone genus — G. pacifica and G. verrucosa — have skin bumps dotting their pink-hued mantles. These warty protrusions, it turns out, can be used to distinguish the two species, which have been incredibly difficult to tell apart. Scientists reporting June 7, 2017 in the journal Marine Biology Research catalogued the distribution of warts on both species, pinpointing two variables that were consistent across the individuals within a given species: distance between the warts and the tip of the mantle and the extent to which the skin bumps spread down the creature's arms.
Octopuses have an excellent sense of touch, according to the World Animal Foundation. Their suckers have receptors that enable an octopus to taste what it is touching.
Most octopuses have no internal skeletons or protective shells. Their bodies are soft, enabling them to squeeze into small cracks and crevices. In April 2016, an octopus at the National Aquarium of New Zealand squeezed out of its tank and made an eight-armed dash for a drainpipe that — luckily for him — led directly to the sea.
A bulbous sack-like body, or mantle, is perched on top of an octopus' head. The only hard part of their bodies is a sharp, parrot-like beak that is on the underside, where the arms converge. Octopuses have powerful jaws and venomous saliva.
Octopuses weren't always squishy creatures. The ancestors of octopuses and squid sported hard shells. These marine animals lost their hard "mobile homes" in the Jurassic and Cretaceous periods. This shell loss likely helped the ancient relatives of today's octopus, squid and cuttlefish become more agile to evade predators and nab prey, the researchers said.
Three hearts
An octopus has three hearts. One pumps blood through its organs; the two others pump blood through its gills. Octopus blood is blue because it has a copper-based protein called hemocyanin.
When an octopus is swimming, the organ that delivers blood to the organs stops beating. This exhausts the octopus, which is likely the reason they prefer to crawl than swim.

Size
Octopuses come in many different sizes. The common octopus (Octopus vulgaris) is 12 to 36 inches (30.5 to 91.4 centimeters) long and weighs 6.6 to 22 lbs. (3 to 10 kilograms).
The giant Pacific octopus (Enteroctopus dofleini) is the largest octopus. They typically grow to 16 feet (5 meters) long and weight around 110 lbs. (50 kg), but one was recorded to weigh more than 600 lbs. (272 kg) and measure 30 feet (9.1 m) across, according to National Geographic.
The smallest octopus is the Octopus wolfi. It is smaller than an inch (2.5 cm) long and weighs less than a gram.

Habitat
Octopuses live in oceans all over the world. Most are pelagic, meaning they live near the water's surface in shells, reefs and crevices. Some species live on the floor of the ocean, making their homes out of caves.
Habits
Octopuses tend to be solitary, though they do interact with other octopuses at times. Some species of octopuses hunt at night, while others only hunt at dusk and dawn.
When scared, octopuses will shoot a dark liquid, sometimes called ink, at the thing that scared them. This will temporarily blind and confuse a potential attacker, giving the octopus time to swim away. The ink can also dull the attacker’s smelling and tasting abilities.
Octopuses can also change color to hide and match their surroundings. They can turn blue, gray, pink, brown or green. The mimic octopus can also flex its body to resemble more dangerous animals, such as eels and lionfish.
If an octopus does get caught — no problem. They can lose arms and regrow them.
Octopuses are fast swimmers but they prefer to slowly crawl along the sea bottom. To swim, octopuses suck water into their bodies and shoot it out a tube called a siphon. This lets the octopus blast off, away from attackers.
Diet
Octopuses are carnivores, which means they eat meat. Meals can include clams, shrimp, lobsters, fish, sharks and even birds. Octopuses typically drop down on their prey, envelop it with their arms and pull the animal into their mouth.
Offspring
Octopuses have short life spans. Some species only live for around six months. Other species, like the North Pacific giant octopus can live as long as five years. Typically, the larger the octopus, the longer it lives.
No matter what, when octopuses mate, they die soon after. During reproduction, a male delivers sperm by inserting a specialized arm (usually the third right arm) into the female's mantle cavity. Sometimes he literally hands her the sperm.
Females usually lay 200,000 to 400,000 eggs, though it varies depending on species. She obsessively guards the eggs until they hatch. She even stops eating. After the eggs hatch, her body turns on her. It goes through cellular suicide, which rips through her tissues and organs until she dies. Meanwhile, the male has swum away and dies in a few months.
When they hatch, baby octopuses are called larvae. They drift in plankton clouds and eat other animal larvae until they mature. As part of the plankton cloud, they are also in danger of being eaten by plankton eaters.
Conservation status
According to the International Union for Conservation of Nature's Red List of Threatened Species, most octopus species are not endangered. Most are either listed as least concern or as data deficient, which means there isn’t enough data about the species to make a determination on their endangered status.
Other facts
Not all octopuses have long arms. The Opisthoteuthis adorabilis’ arms are very short and have webbing in between each one. This gives the tiny octopus the look of an orange ghost. Octopuses are about as smart as house cats. The oldest octopus fossil is from an animal that lived 296 million years ago — millions of years before the dinosaurs lived.
(Sources: Live Sciens, Smithsonian article, World Animal Foundation)