An international team of biologists including researchers from the Moscow State University discovered new species of fluorescent polyps living in colonies on the shells of gastropods. 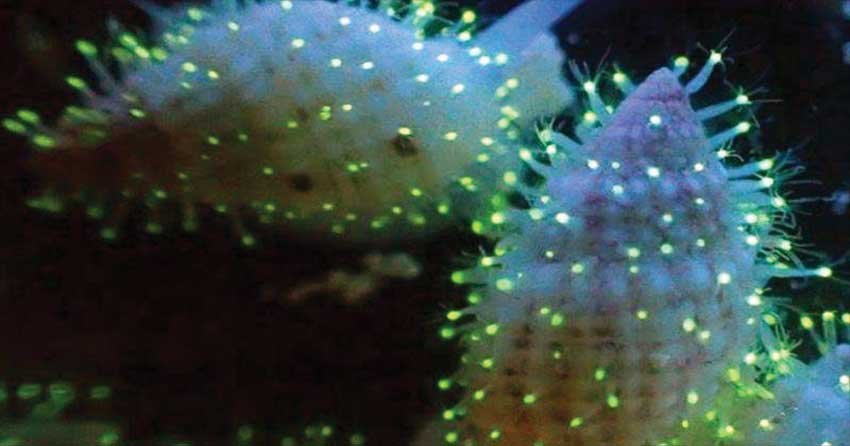 The Red Sea is known as one of the best tourist destinations for good relaxation and scuba diving, but few imagined that this place is inhabited by many sea creatures awaiting discovery. An international team of biologists, which included researchers from the Lomonosov Moscow State University and the Russian Academy of Sciences, has discovered a new kind of beautiful luminous creature. They also report for the first time that the localization of luminescence in certain parts of the body can distinguish different species of organisms that have otherwise identical structures. The collections of the MSU have been enlarged by these new fauna species and their DNA.
During the investigations of the biodiversity of coral reefs of the archipelago Farasan (Saudi Arabia, south of the Red Sea), biologists observed marine life under the UV light with yellow filters. They found "fluorescent lanterns" that were very similar to hydrae from the Biology school textbooks. But unlike their distant relatives who lead solitary lives in fresh water, new species from the Red Sea form spreading colonies, decorating the miniature shells of a gastropod called Nassarius margaritifer (20-35 mm in length) with garlands of green lights. These mollusks bury themselves in the sediment during the day, crawling out to the surface to hunt other invertebrates at night.
"Sea hydroids, unlike hydrae, are often found in colonies and can branch off tiny jellyfish". "The unusual green glow of these hydrozoas (presumably, a new species of the genus Cytaeis, whose body length reaches 1.5 mm) was revealed in the peristomal area of the body."
Such unusual symbioses are poorly studied, and the role of the glow has not been hitherto investigated. The zoologists suggest that the glow around the mouths of polyps may attract prey. "Fluorescent flashlights" may be visible to other invertebrates in the moonlight, and at sunset and sunrise. The discovery raises new questions. It is yet to be determined how "fussy" these polyps are about choosing their hosts, how the activity of Nassarius snails and luminous hydroids change during the day, and how the fluorescence varies within species and between closely related species of hydrozoa.

The green glow of the Nobel Prize

Fluorescence is a glow of some proteins or pigments under light illumination, fading instantly after illumination stops. Fluorescent proteins are widespread among the corals Anthozoa and hydroid jellyfishes, and also were found in some lancelets (Cephalochordata) and combjellies (Ctenophora).The scientist Osamu Shimomura was the first who isolated the famous green fluorescent protein (GFP) from the jellyfish Aequorea victoria that was later widely used in experimental biology as a glowing marker for the study of protein work in cells. In 2008, the Nobel Prize in Chemistry was awarded to Osama Shimomura, Martin Chalfie and Roger Tsien "for the discovery and development of the green fluorescent protein, GFP."
According to zoologists, the fluorescence of hydrozoa has only been studied in six species. In some species, fluorescence is localized on the tentacles or stalk, and not around the mouth, or it is shifted to another part of the spectrum. The maximum of fluorescence emission of the new species of the genus Cytaeis is at 518 nm.
The comparison of the fluorescence of hydroid found in the Red Sea to that of other hydroids of the same genus, analysis of nuclear and mitochondrial DNA of the hydroid and evaluation of the data presented in the gene bank revealed the species-specific fluorescence of morphologically indistinguishable species of Cytaeis. Thus, using hydroids as an example, the researchers first demonstrated the ability to use peculiarities of the localization of the fluorescence for discrimination of similar invertebrates. The fluorescence can be useful for quick identification of hardly recognizable species and for the studies of ecological peculiarities and distribution of hydroids and their hosts—mollusks. 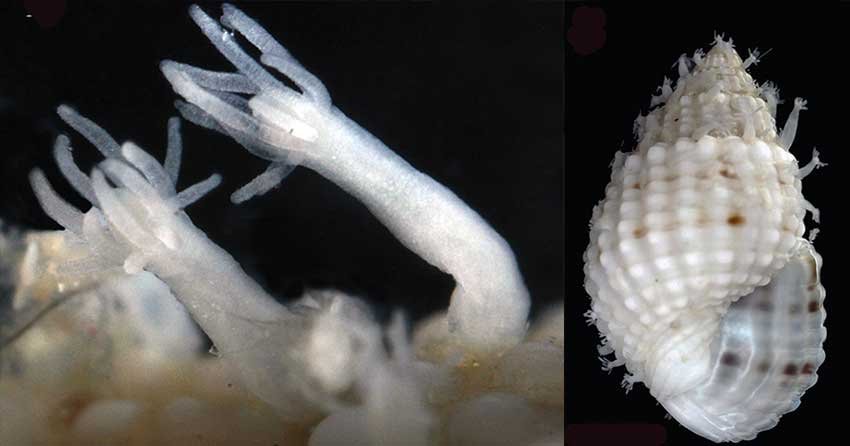 So close to wonders

According to Vyacheslav Ivanenko (Lomonosov Moscow State University), who discovered unusual polyps in 2016, a great number of new species with unusual features are still waiting for the researchers in the shallow waters of seas, accessible with scuba gear. (Source: phys.org/news)