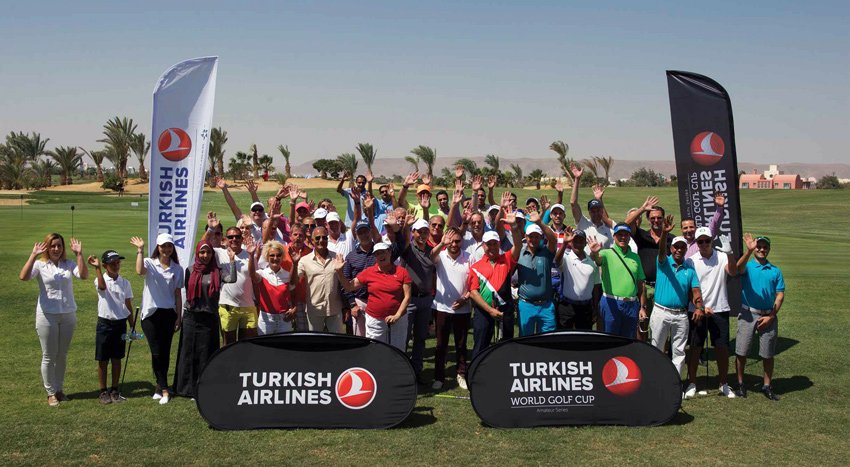 Turkish Airlines World Golf Cup Tournament took place at El Gouna Golf Club on the 6th of May, 2017. It was already the second successful Golf Tournament organized and sponsored by Turkish Airlines.
Mr Ahmet Akbulut, General Manager of Turkish Airlines Hurghada, mentioned that this year many foreign journalists were invited to cover both events. Strong promotion by the European press & online media might help to promote Golf on the Red Sea Riviera for the European market.
An award ceremony and a gala dinner took place at the El Gouna Steigenberger Golf Resort.
Mr. Ahmet Akbulut presented the winning awards and congratulated everyone who took part in the golf tournament. He also expressed in his speech a great hope that such activities might help to improve the tourism industry in Egypt and especially on the Red Sea.
Congratulations to winners! Mr. Arthur Holleyman won the competition with a Net 36 Points. He is set to play the Grand Final in Antalya, Turkey, this coming October.
Mr. Charles Cutshall won the nearest to the pin prize for men and Mrs. Stricker Jeanette for ladies.
Mr. Islam Radwan, Turkish Airlines Marketing Rep, and all team of Hurghada Branch worked hard to bring this event to a victorious conclusion.
All the participants were impressed by Turkish Airlines’ hospitality and unlimited possibilities.
We would like to express special thanks to Turkish Airlines Hurghada for supporting all kind of sports in Egypt, especially golf & water sports on the Red Sea Riviera and promote our holiday paradise for the European market.