How is the bone created around the implant? - All About Dental Implants Part 6 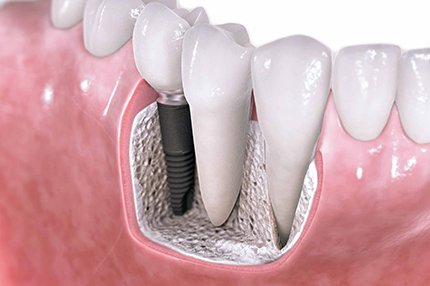 An intricate balance between the activities of two major cell types referred to as the osteoblast and osteoclast determine a person's total bone mass.

Osteoblasts are the builders and make collagen and hydroxyapatite. Some of the osteoblasts become buried in their matrix and then they are referred to as osteocytes. The rest of the osteoblasts cover the new bone's surface. Waves of osteoblasts that move into the area form new layers of bone.

Osteoclasts are larger cells whose function is to dissolve bone by acting on the mineral matrix. They make enzymes such as collagenase, which breaks down collagen. Osteoclasts also secrete various acids that can dissolve the hydroxyapatite structure.

There are a variety of signals that control the function of osteoblasts and osteoclasts. Interestingly, osteoblasts make small proteins. OPG can prevent osteoclasts from being activated. Osteoblasts change their shape and become buried in their matrix, connected to each other only by thin processes called canaliculi. After the osteoblasts are buried in bone, they're referred to as osteocytes. Osteocytes account for 90 percent of all cells in the skeleton.

Bone remodeling starts with resorption, which the osteoclasts orchestrate. Osteoclasts break down bone by dissolving mineral and resorbing the matrix that osteoblasts have formed.

An easy way to remember the work of osteoblasts, osteoclasts, and osteocytes is: