Tombs of high priests uncovered in Al-Ghoreifa in Menia 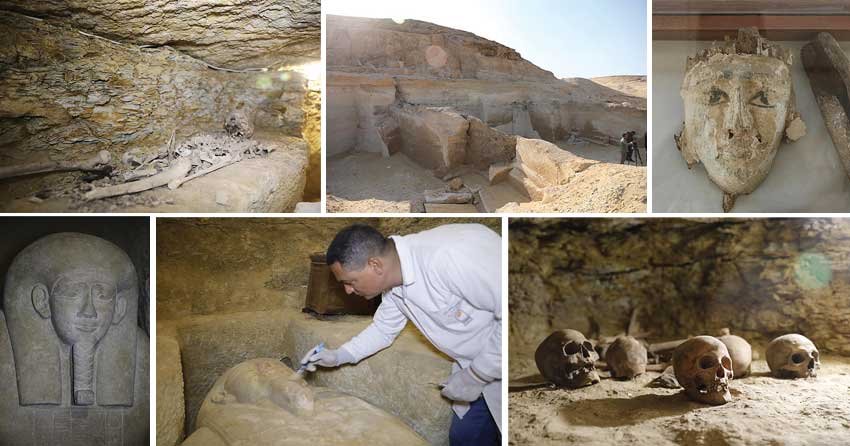 Dr. Khaled El-Enany, Minister of Tourism and Antiquities, announces the first archaeological discovery of the Ministry of Tourism and Antiquities in the year 2020, at the Al-Ghoreifa area in Tuna El-Gabal archaeological site, at Minya Governorate, where the Egyptian archaeological mission, headed by Dr. Mustafa Waziri, Secretary General of the Supreme Council of Antiquities succeeded to uncover several late period communal tombs of the high priests of god Djehuty and senior officials in the fifteenth Nome of Upper Egypt and its capital, Ashmunin.
Menia Governorate continues to reveal its secrets, since 2018 several discoveries were made as a cachet of mummies was unearthed as well as several tombs filled with sarcophagi and funerary collection which attract the whole world to Egypt and its unique heritage.
Menia is to be put on Egypt’s tourist map.
Dr. Waziri explained that, this is the third season of the mission's work, during which 16 tombs were revealed filled with about 20 sarcophagi and coffins of various shapes and sizes, including 5 anthropoid sarcophagi made of limestone and engraved with hieroglyphic texts, and five wooden coffins in good conservation condition, some of which are decorated with the names and titles of their owners; in addition to more than 10,000 ushabti figurines made of blue and green faience; most of which are engraved with the titles of the deceased.
The mission, also, found more than 700 amulets of various shapes, sizes and materials; including heart scarabs, amulets of the gods, and amulets made of pure gold such as the “Ba” and an amulet in the shape of a winged cobra.
Many pottery vessels of different shapes and sizes, which were used for funerary and religious purposes, were also unearthed along with tools for cutting stones and moving coffins such as wooden hammers and baskets made of palm fronds. The discovery includes also eight groups of painted canopic jars made of limestone with inscriptions showing the titles of its owner who took the title of the singer of the God Thoth. Two groups consisting of four canopic jars made of alabaster for a woman and a man were also unearthed, and finally, a group of stone dough without any inscriptions representing the four sons of Horus.
One of the discovered stone sarcophagi belongs to the son of Psamtik, who took the title of the head of the royal treasury. He was named with many titles, most important of which are the priest of Osiris and Nut. The second sarcophagus belongs to Horus and has a scene depicting the goddess Nut, spreading her wings above the chest and below it inscriptions showing the deceased's titles, especially the title of the royal treasurer, and the sarcophagus of Epy which has three vertical lines of hieroglyphic inscriptions showing the names and titles of the deceased.
The sarcophagus of the Djed of Djehuty Iuf ankh, which is made of well-polished limestone, is considered one of the most important coffins discovered during this season due to the titles inscribed on the sarcophagus lid (which is the royal treasurer and bearer of seals of Lower Egypt and the sole companion of the King). These titles nicknamed the rulers of the regions in Central Egypt.
The fifth sarcophagus has hieroglyphic inscriptions showing the surnames of the deceased, most important of them is the title of “the assistant”. It is worth mentioning that, during its previous works, the mission had discovered 19 tombs containing 70 stone coffins of various sizes and shapes.
(Source: Egyptian Ministry of Antiquities)