The Face of a Beautiful Egyptian Woman Brought to Life from 2,000-Year-Old Mummy 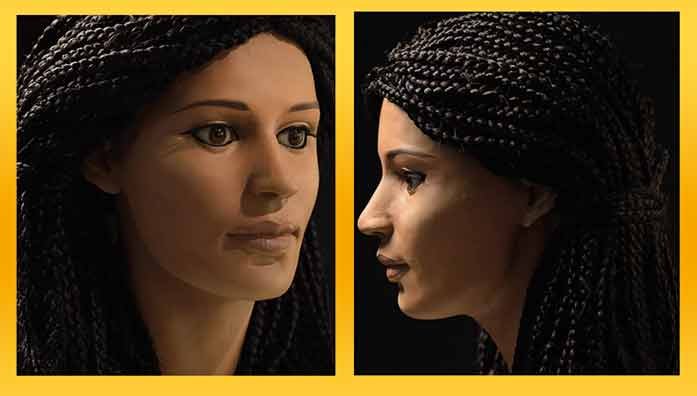 The face of a young Egyptian woman who lived at least 2,000-years-ago has been reconstructed from a 3D print out of her skull. The forensic techniques used revealed surprising facts about the beautiful woman, who has been named Meritamun, meaning beloved of the god Amun. Researchers from the University of Melbourne in Australia, in collaboration with the Victorian Institute of Forensic Medicine, used technologies of CT scanning, 3D printing and well known forensic facial reconstruction. Although, the mummy is incomplete, the remains stayed wrapped throughout the process. As Dr Ryan Jefferies, curator at the university's Harry Brookes Allen Museum of Anatomy and Pathology, said: "This allowed for a non-invasive technique where we were able to see through all of the layers of the specimen, including the remnant muscle and all of the skull..
It's a powerful insight into someone's life that lived thousands of years ago. The advances in technology are making it easier. Whereas traditionally there was a lot more speculation, now we can be scientifically accurate with the data we're using which becomes easier to do the reconstruction." The head of the mummy has spent more than 90 years in the basement, which belongs to the University of Melbourne. According to the researchers, she died as a young woman between the age 18 and 25. This was determined due to the width of her mouth and the positioning of her teeth and her nose shape and size was determined by the width of the nasal aperture. The researchers also found out that she had quite large eyes. The mummy was brought to Australia by English anthropologist Frederic Wood Jones, who joined the University of Melbourne as head of anatomy in 1930. It was excavated most probably between 1907 and 1908, when Jones completed archaeological survey work in southern Egypt to save ancient relics ahead of the Aswan Dam expansion on the Nile. The reconstruction of Meritamun was just the beginning of the project related to the mysterious mummy. Now they hope to learn how she lived, where she came from and how she died. Moreover, according to Jefferies, the reconstruction is an exceptional teaching tool for students studying forensic analysis and pathology. It may have opened the doors to future work on many of the 12,000 forensic human specimens which belong to the collection from Melbourne. Facial reconstruction from old skulls is a relatively new technique but is beginning to be practiced more frequently. Source: Ancient-origins.net/news-history-archaeology