Min of the Desert 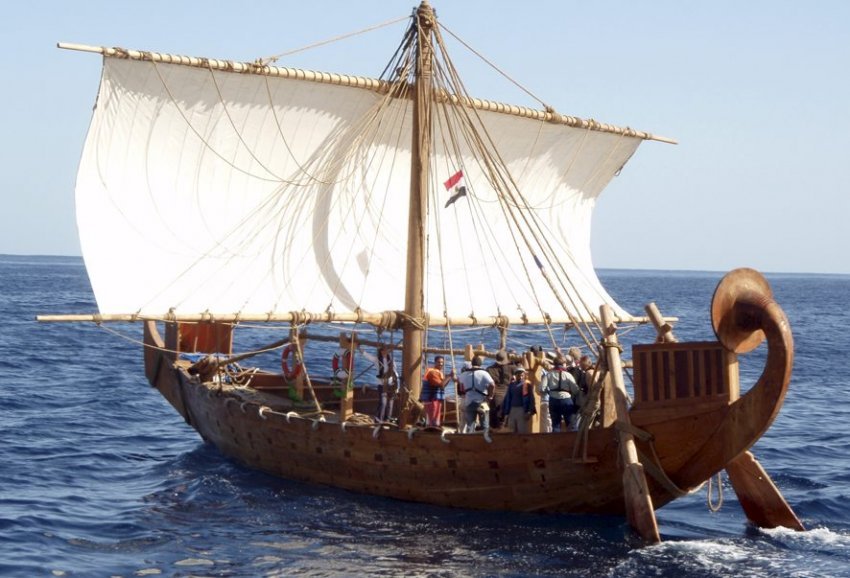 Min of the Desert is a reconstruction of an ancient Egyptian seagoing ship of the first quarter of the second millennium BCE. Built in the modern Hamdi Lahma & Brothers shipyard in Rashid (Rosetta), Egypt, using ancient techniques and 120 year old Douglas fir timber which closely resembled the Cedar of Lebanon, which would have been used by the Ancient Egyptians to construct their ships.  A unique team of French, Italian, American and Egyptian archaeologists working with shipping experts came together to reconstruct this ancient Egyptian ship.  The idea was to set sail across the Red Sea in order to experience how the ancient Egyptians sailed to the land of Punt (possibly modern day Ethiopia) and to expand the data available from archaeological evidence and the technical study of ships in ancient Egypt.  The question has always been “How far did the Ancient Egyptians travel?”  “Were these ships designed for long ocean voyages?”

Because no seagoing ships exist to study, the reconstruction was entirely theoretical.  Its basis was primarily the ship components from Wadi Gawasis (featured in the next edition of the Red Sea Bulletin).  They compared the dimensions of those components with similar features illustrated in the Punt reliefs at Hatshepsut’s funerary temple at Deir-el-Bahari, and discovered that they were constant across several dimensions and tests (steering oar blades, beam ends, oar looms, crutch height).  They also correspond well to components illustrated in the 2mtr plus long models of Amenhotep II and in the Dashur boats, if the scale of the Dashur boats was doubled.

The archaeological team visited the Giza Plateau where Khufu's solar boat is located and to the Egyptian museum where the funerary boats of Senwosret III, unearthed at the Dashur necropolis, are exhibited.

The oldest known expedition to Punt was organized by Pharaoh Sahure of the 5th dynasty (2458-2446 BC).  Also around 1950 BC, in the time of King Mentuhotep III, 11th dynasty (2004-1992 BC), an officer named Hennu and three thousand men from the south transported material for building ships through Wadi Hammamat and  on to Punt acquiring a number of exotic products including incense, perfume and gum which were brought to Egypt.  A very famous expedition took place in the reign of Queen Hatshepsut in the 18th dynasty (1473-1458 BC).  It was formed of five ships, each measuring 70 feet long, and with several sails. These accommodated 210 men, including sailors and 30 rowers, and were led by the Nubian general "Nehsi".  They departed at Quseir on the Red Sea for what was primarily a trading mission.

The hides of giraffes, panthers and cheetahs, worn by temple priests, were imported along with live animals either for the priests' own menageries or as religious sacrifices, including the sacred cynocephalus or dog-faced baboon.  Little wonder, then, that Punt became known as the "Land of the Gods" and as the personal pleasure garden of the god Amun.  Gold, ebony, ivory, leopard skins and the frankincense necessary for religious rituals were also brought back from Punt which is now thought to be part of modern Ethiopia.

Min of the Desert is 20 metres (66 ft) long and nearly 5 metres (16 ft) wide. It has a cargo capacity of about 17 tonnes, and displaces 30 tonnes of water. It is held together entirely by mortice--and-tenon joints in double lines along the plank edges.

Min of the Desert was available for testing for only a limited time. Short trips on the Nile at first, and then on the Red Sea, before attempting the longer trial voyage south towards Sudan from Safaga along the route used by the Egyptians to the legendary land of Punt.  The square sail high above the deck was quite large at 14.25 x 5 metres, and it had no brailing lines (an innovation of the late 13th/early12th century BCE).  Day sails and practice in rowing prepared the crew for the longer trip on the Red Sea.

The team were extremely surprised at how easy the ship was to sail and how it handled when manoeuvring and steering; its overall responsiveness was remarkable.

Those who made the test voyages were generally full of praise for the technology of the ancient Egyptians.  The team grew to respect the technology and to have faith in Min of the Desert.