Stories about the medicinal herbs of Sinai and Bedouin medicine 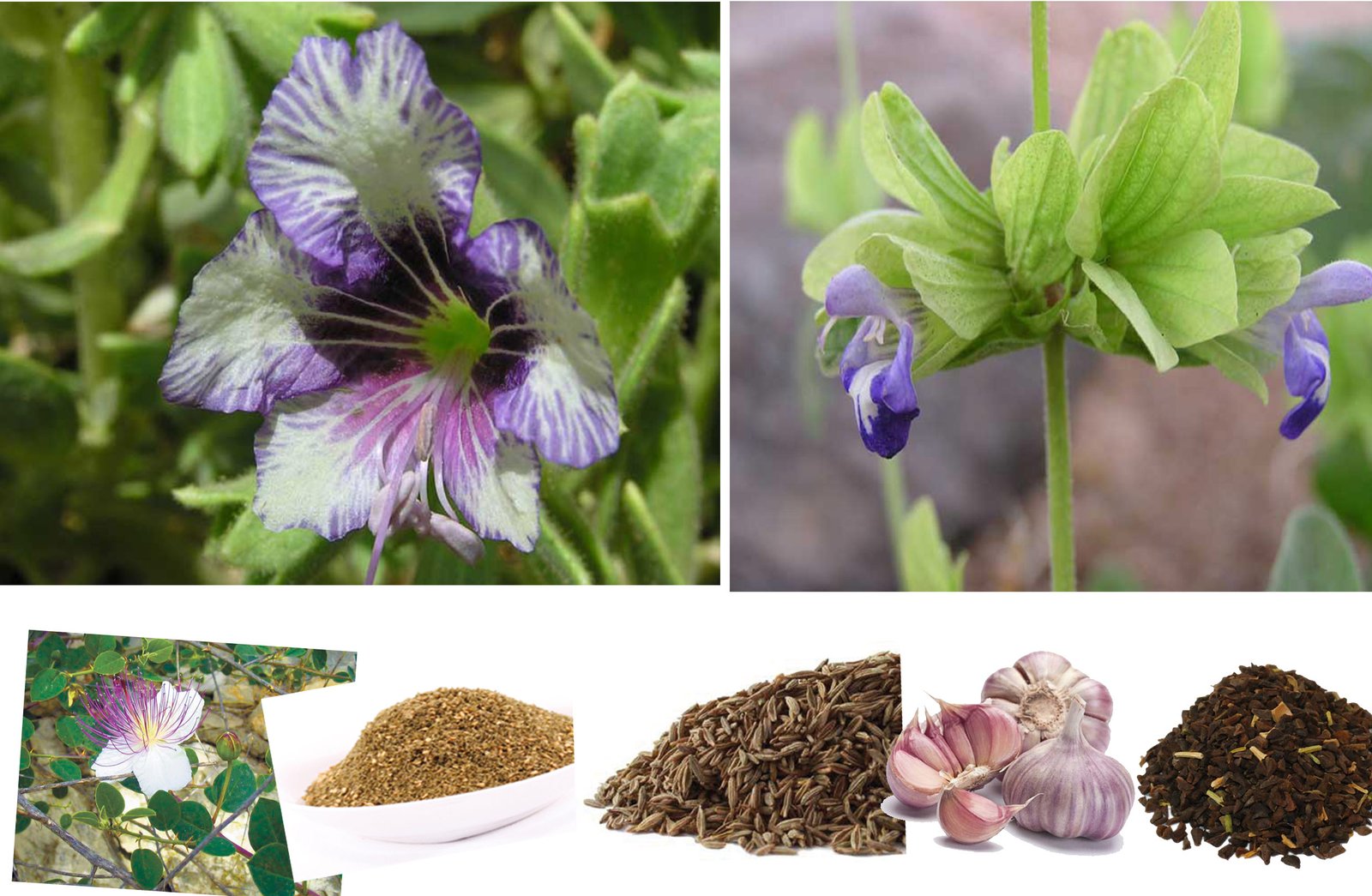 The Bedouin are wary of this plant but will smoke it with tobacco if they need to relieve the symptoms of asthma. Clever grazing animals eat it early in the season but avoid it later.
Sakaran is a toxic plant belonging to the Solanaceae, a family in which has inoffensive food plants such as potatoes and tomatoes that cohabit with toxic weeds such as Mandrake and Deadly Nightshade.
The toxins specifically target the autonomic nervous system. This has the servile role of regulating our essential bodily functions without troubling our more exalted conscious faculties. The specialized muscles of heart, eyes, blood vessels, bowels, bladder, uterus, and glands are all wired up for the spontaneous modulation of heart beat, breathing, salivation, eye pupil size, perspiration, urination, defecation and sexual arousal. Blushing is also a response of the system.

The Solanaceae toxins specifically target the parasympathetic side. They inhibit the firing of the nerves by blocking the action of acetylcholine, the only chemical messenger used by the parasympathetic system to transmit nerve signal across synapses, a small gap between nerve connections. The Solanaceae toxins bind to specific receptors in the synapses, preventing them from responding to the acetylcholine signal and the parasympathetic nerves consequently shuts down, unable to bring the heart back to normal after an adrenalin rush. All bowel movements, loosening of sphincters, secretion by glands and focusing of the eye muscles are inhibited.

The graphic effects of such inhibition can be seen after an overdose. The mouth, throat and nasal passage become so dry that any attempt at speaking results in animal like croaking and barks. Constipation follows with difficulty urinating, rapid beating of the heart, blurred vision, and increased sensitivity to light, excitement and restlessness. Hallucinations and delirium may be induced and death can follow. Cleopatra is said to have considered it as a way of committing suicide and tested it on some of her slaves, only to be put off by the gruesome spectacle. The wives of the Roman Emperors, Augustine and Claudius, were less squeamish and dispatched several of their rivals in this manner.

In smaller doses, the toxins act as a general depressant on the Central Nervous System. This arises because acetylcholine is not only present in the autonomic system but is one of a cocktail of nerve transmitters active in the brain. By selectively blocking the action of acetylcholine, a shift in the balance of brain activity occurs. The effects are less specific than on the autonomic system but can result in euphoria followed by sleepiness and amnesia. The effect on memory has made the Solanaceae alkaloids the drugs of choice for cads intent on theft or seduction. Drinks are spiced to induce intoxication in the unwitting victims who then fail to recall the circumstance of their deception once they recover. The drugs have also been used since ancient time as a treatment for sleeplessness, and in combination with opium, found favor as a general anesthetic up to the 19th century when they were finally replaced by chloroform and ether.
The extraction, purification and identification of the Solanaceae toxins have allowed modern medicine a more nuanced application of their properties.
Scopolamine was first isolated from the Hyoscyamus species (Henbane) of which Sakaran is one example. When released slowly from a transdermal patch at the miniscule rate of 330 micrograms a day, it reduces the nausea associated with motion sickness or post-operative recovery. When diluted in eye drops, it causes dilation of the pupils and paralysis of the focusing muscles, facilitating optical surgery.

Atropine was first isolated from Atropa belladonna, Deadly Nightshade. It is used as an antidote to nerve poisons like sarin, once used in an attack on the Tokyo underground by members of a demented religious sect. The poison specifically blocks the action of cholinesterase, an enzyme which normally breaks down acetylcholine to prevent it from accumulating and wreaking havoc on the body’s normal processes. And that is exactly what happens when the enzyme is blocked by the poison. The parasympathetic nervous system is forced into overdrive, causing runny nose, drooling, difficulty breathing, constricted pupils, vomiting, diarrhea and involuntary urination. The victim eventually dies of convulsive spasms. Atropine blocks the acetylcholine receptors in the heart, soft muscle and glands, thus reducing the physiological symptoms of over stimulation but has no effect on the skeletal muscles which have a different class of receptors for acetylcholine. Another drug, pralidoxime, is therefore needed to inhibit the fatal spasms. Hyoscyamine was first isolated from mandrake and henbane and has a similar effect to scopolamine.

Almost a thousand species are known, the largest genera amongst the family of Labiatae (the Mints). Salvia is best known as the culinary herb, sage, which imparts a sausage like flavor to meats and is a good condiment to rich, oily foods as it aids digestion. It comes in several varieties, Dalmatian (Salvia officinalis), Spanish (Salvia officinalis lavandilufolia), and Greek (Salvia triloba), each varying in their bitter aromatic quality. South American sages have a sweet, fruity fragrance and come with red, pink, cream or blue blossoms, often cultivated as ornamentals. Some are pollinated by humming birds.  Sacred sage from Mexico (Salvia divinorum) causes psychedelic tripping or shamanistic visions, the only hallucinogen in the mint family and still legal in most countries.
The Bedouin don’t use Salvia multicaulis as a cooking herb, and it doesn’t trip the mind, but infusions are highly valued for subduing a cough, reducing high blood pressure or relieving the pain of toothache.
(Source: http://wilderness-ventures-egypt.com/category/stories-medicinal-herbs)

“Massbowah”
A mixture of seven different herbs (including: Zattar, Sabra, Haloul, Mur) used by pearl divers on their long absences to cure general illnesses like colds, flu and stomach aches.

“Zattar”
Boiled with water and sugar, it helps to relieve coughs.

“Yansoon or Sanoot” - Anis
Aids in digestion: if added to tea it can cure mild colds and dull toothache; when mixed with other herbs it can cure vomiting; mothers give it to their babies to relieve colic.

“Kirkim, Liban, Hilbih”
Mixed together and boiled, the liquid is good for colds.
Turmeric sticks can also be burnt and the fumes inhaled to help cure coughs.
Fenugreek can help with rheumatism and is sometimes given to pregnant women as it can also help with liver problems as it reduces enlargement of the spleen.

Used to cure toothache. Mismar mixed with honey is used to cure coughs.

“Kheel”
Can cure stomach and toothache, used for making wounds softer; used in ancient times to remove bullets from the body easily.

“Zanzibeel”
The powder can be mixed with milk and drunk to relieve mild coughs and stomach problems; it can be made into a paste with water and rubbed over painful areas of the body; it can help with anemia too.

“Thoum” - Garlic
If eaten it can prevent and cure colds; it is also beneficial for high blood pressure; it has antiseptic properties too.

“Sabra”
Can cure wounds, helps to clean the stomach.

“Massoufa”
Mixed with “Haloul” to make an herbal tea, it cleanses the stomach.

“Haloul”
Mixed with “Zahra” and other herbs it is boiled to make a tea, it acts as a purgative which is good to take before an X-ray.

“Harmal”
Used to help indigestion; it also helps diabetes and if burned around the house the smoke is believed to purify the air after an outbreak of measles.

“Hail”
Used to get rid of excess gas in the stomach which causes bad breath and nausea; also helps with headaches, piles and minor eye problems.