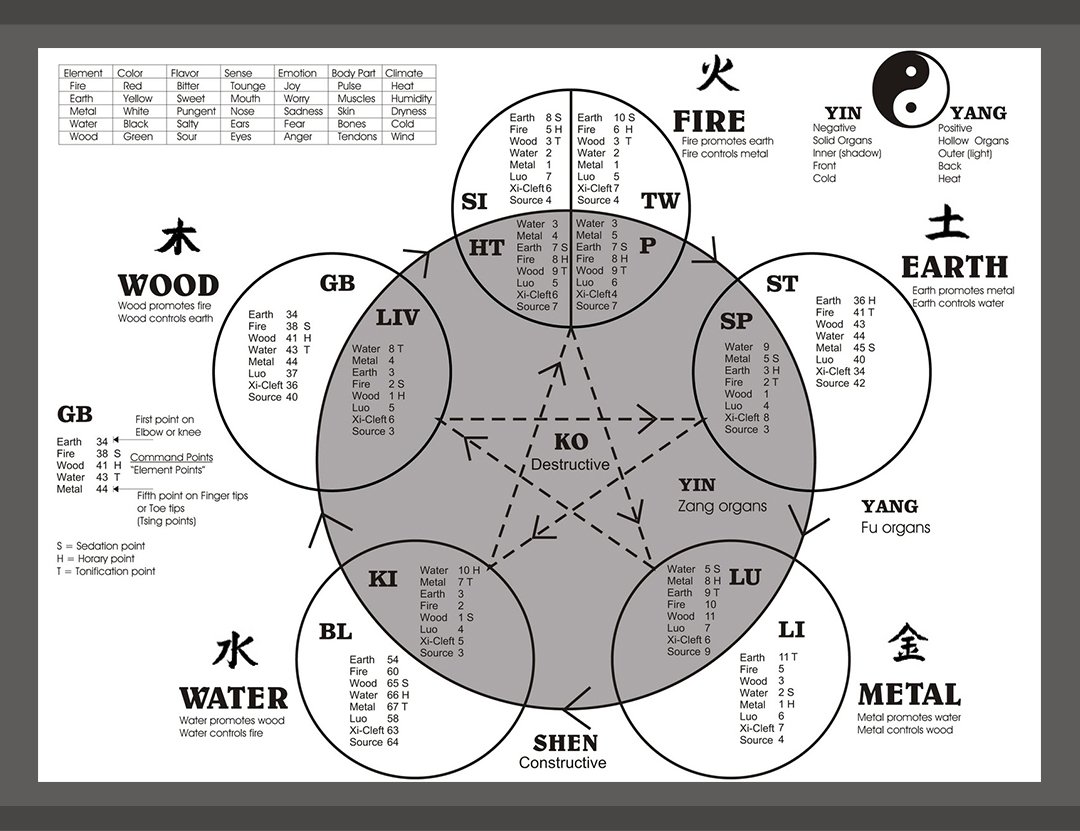 All the diversity of the universe’s phenomenon, visible or invisible – is a result of Yin-Yang interaction.

These interactions become apparent through five fundamental phases of energy, often called Five Elements. These 5 elements – are not only five physical elements, which we can find around us, but five types of “CHI”* - energies in the Universe.

Yin-Yang – is the root and trunk of all creation. Five Elements – branches carrying leaves and flowers are fruits of Cosmos. Results of the “Five Phases” of energy interaction are functionality and activities of the sun, moon, stars and total life on the Earth. These Taoist cosmic ideas might look abstract and simple, but modern science has come to the same ideas of Creation. All substance of the Universe consists of atomic fraction. Atoms believed to be the smallest and ultimate fractions finally consist of subatomic fractions and waves which are depending on the power of positive and negative polarity. Taoists saw the Universe as dimensions, immense oceans of interacting energies motored by fundamental interactions of Yin-Yang. Mankind is the most complicated result of those interactions.

The practices of Chi-Gong and Tai-Chi help to develop the sensitivity to different streams of energies and its directions. The harmony and confluence of six directions is one of the main principles for the practice of the curative routine of Chi-Gong “Flying or Soaring Crane”.
In the broad meaning – it’s the interaction between the sky, earth, four corners of the earth and the Man in the center of Creation.

While we are moving in space we are more or less constantly pointed to one or other directions. The walls of our houses each look to a definite direction. While eating we are usually sitting on the same chair faced to the same direction. We have our favorite cozy chair where we spend our evenings; we sleep on the same bed, stretching to the same direction. We go to the office in the same direction, use the same table in the office… most of us are limited in our activities by fixed, surrounded space. Often we are directed to the same directions, but rarely to other ones. As similar actions continue during weeks, months or years, the disproportions in energy increase and it’s destroying the harmony and balance. But every direction is connected to a definite type of energy! Balance and Harmony can be reached by keeping proportion between all energies and directions. If you have connection with energy of all directions it will be easy to maintain and improve the functionality of all your organs. In case of sickness, treatment would be quicker if you can reach balance by connecting to a definite canal of energy (missing when out of balance).