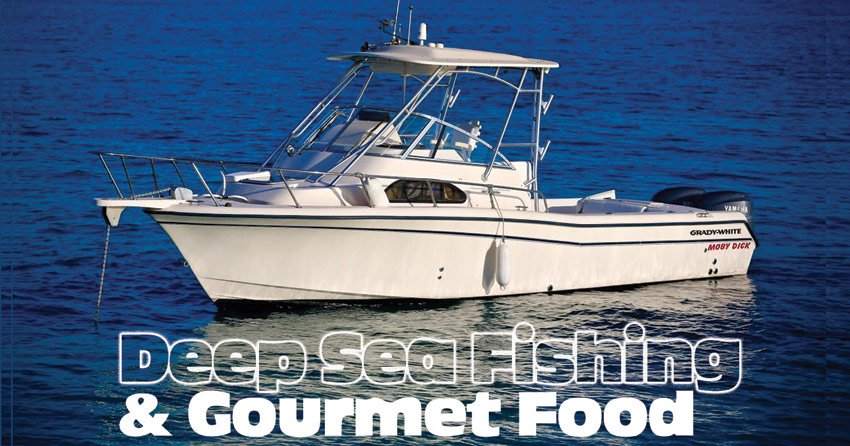 Besides photography, fishing became the main hobby of Sherif Lotfy, entrepreneur and owner of the famous Moby Dick restaurant, which opened 21 years ago in Hurghada. It is currently ranked No#1 in TripAdvisor for Hurghada and El Gouna. A part of the success of Moby Dick is based on the concept to serve very special steaks of fish caught by Sherif Lotfy himself, up to depths of 500 m.


Swordfish is a special challenge for any fisherman. They are named after their bill, which resembles a sword. Sword fish live in depths of around 500 m, and reach up to 75 kg in weight here in the Red Sea. It feeds mainly on giant squids. Steaks from this fish are just out of this world.

Amberjacks are a game fish, most often found in the warmer parts of ocean, typically in depths of 20 -75m, with a weight of about 15 kg. Amberjacks are voracious predators, which feed on squid, fish, and crustaceans, which make their meat especially tasty.

Yellowfin Tuna in the Red Sea reach weights of over 100 kg, but is significantly smaller than the Atlantic and Pacific Bluefin tunas, which can reach over 450 kg. Yellowfin tuna are a major sport fish pursued by sport fishermen. Tuna filets with its firm meat are top in menus for fish lovers all over the world.

Wahoo is found worldwide in tropical and subtropical seas. They can reach up to 2.5m and weigh up to 80 kg. Its speed of up to 97 km/h make it a great prize game fish. The flesh of the wahoo is white to grey, delicate to dense, and highly regarded by many gourmets.