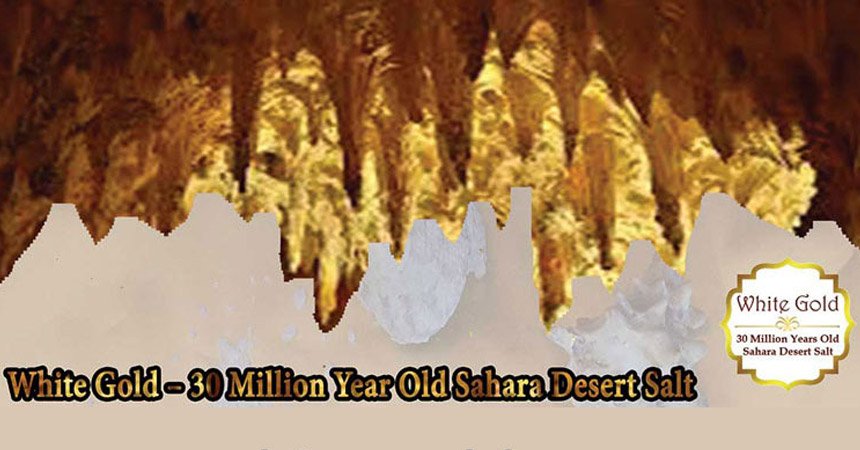 Already for the early high cultures such as Egyptians, Sumerians and Babylonians, salt was a significant substance. They used it as a spice and as a preservative for their food.

Humans consume 4 to 8 Gram salt daily. For thousands of years people have developed sophisticated methods to extract the valuable mineral. For long time salt remained a very valuable commodity and brought those in possession wealth and power. The "white gold" created prosperous towns and gave wings to the international long-distance trade. The industrialization transformed the luxury good to an everyday product available for everyone.

Today we mainly use cheap industrial produced iodized cooking salt which can be responsible for various health disorders such as cellulite, rheumatism, arthritis, kidney failures, gallstones, high blood pressure, and the acceleration of the aging process.
Use "White Gold" sea salt instead, preserved for you for millions of years! Natural not refined sea salt consists of up to 80 different trace elements and minerals. These make the salt so healthy and tasteful.
Regularly sea salt is obtained by thermal evaporation of seawater. Beside sodium chloride the sea salt contains minerals which give the salt a special taste and make it so popular in the modern kitchen.
The quality of the salt depends on the quality of the water. Today oil, chemicals and heavy metals have a negative effect on the quality of the sea salt produced. Most of sea salts we find in shops today were industrially refined, healthy minerals were removed and it lost its taste, healthy elements and natural power.
Around 30 Million years ago large amounts of water were separated from the open sea, dried out and were covered trough tectonic moves. Result was the purest natural salt rich in minerals, which can be found today in hidden caves of the Eastern desert. Till today the Khushma’an Bedouins, who live in the area since 1790, keep the location of the caves secret.
Small quantities are made available for cooks and food lovers who add this special salt to their collection consisting of Fleur de Sel, Himalaya Salt, Maldon Salt and others. For many the White Gold from the Eastern Arabian Desert became their favorite, because of its unique and mild taste, snow white color and crystalline structure, that makes it easy to use.
White Gold is the special present to bring home from your holiday in Egypt. It is available in rocks, nuggets or milled. All products are sealed, and the origin is certified by Sheikh Abdel Zaher, the oldest Sheikh of the Khushma’an clan.
For more information call +2 0106 317 6132 (WhatsApp) or email carobo@msn.com