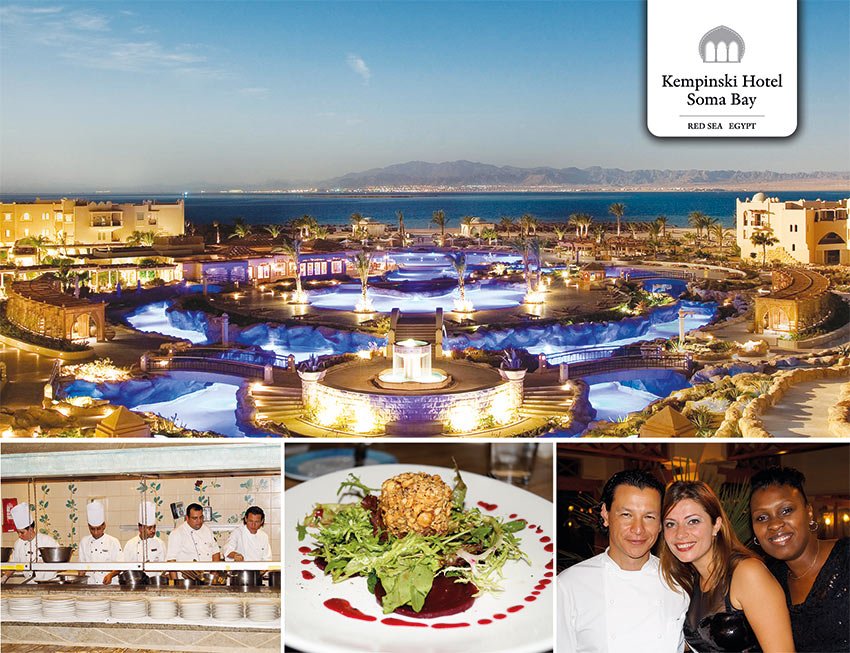 Kempinski Soma Bay hosted another fine dining event at Al Mar Restaurant & Bar on the 18th of April. This time Soma Bay Development Company S.A.E invited over 200 elite guests to a four course menu, prepared by the world famous chef Bobby Chinn (www.bobbychinn.com) and supported by the team of Kempinski’s outstanding chefs. Bobby is one of the more colourful global chefs. His restaurants in Vietnam, Restaurant Bobby Chinn in Hanoi (since 2001) and Bobby Chinn Saigon (since 2011), have been compared to Rick’s Café of Casablanca. A short while ago he relocated to London and opened The House of Ho in the center of bustling Soho. Bobby’s food mixes French technique, Californian sensibility, a pinch of Middle Eastern spices and a touch of South East Asia’s flavours. He often breaks the rules in the kitchen and embarks on a cross-culinary adventure, but he never forsakes taste for invention. The wine was presented by Lebanese wine maker Labib Kallas and his charming wife Rania, responsible for the success of EgyBev’s winery located in El Gouna. It is the only Egyptian winery making its wine exclusively from grapes harvested in Egypt. All vineyards of EgyBev produce true bio grapes, which are the basis for a production that gets more and more attention on wine tastings all over the world. Jardin du Nil Red and White have been decorated with several medals on international wine tastings. Jardin du Nil White 2011 vintage, even received a bronze medal at “Decanter World Wine Awards 2012”, the most comprehensive and authoritative wine competition in the world. The guests were received with a glass of Le Baron, a sparkling wine produced by the Méthode Champenoise, followed by a four course menu matched with wines from EgyBev. Bobby Chinn’s creation: • Seafood Ceviche, served with Beau Soleil White • Hazelnut Encrusted Goat Cheese Salad, served with Jardin du Nil White • Wild Mushroom Risotto, served with Jardin du Nil Red • Chocolate Mouton, served with Beausoleil Port Style