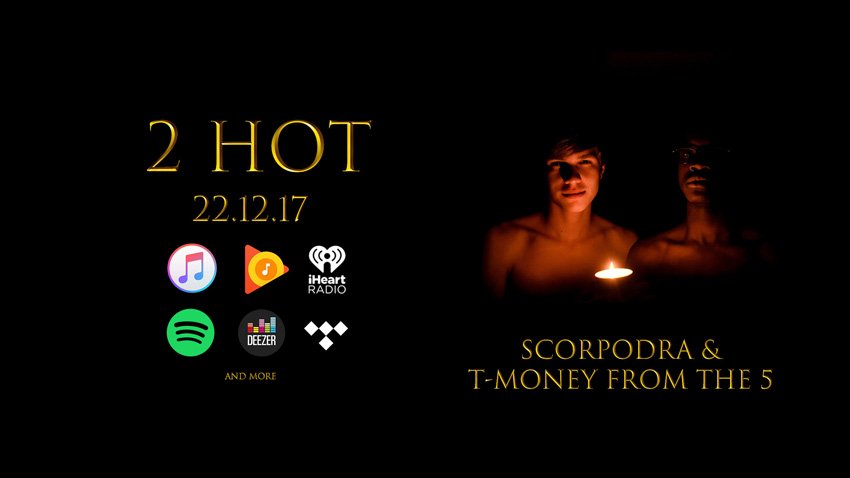 ‘2 Hot’ is a hip-hop single published on the 22 December 2017. DJ & Producer Scorpodra and rapper T-Money from the 5 met in the UK during their studies at UWC Atlantic College in Southern Wales, where they created their own unique hip-hop style.
Scorpodra developed new sounds and beats, written for the style of talented Canadian rapper T-Money, who wrote the text and rapped over it. “2 Hot” came out great, with clean lyrics, an aspect that is hard to find in the hip-hop scene.
The lyrics of the song are about the life of the young rapper T-Money and are in line with the emotions of his fans… I'm too hot to handle…I wrote this song at a Shick Shack … I feel like Mayweather, I don't know defeat … They call me Miami 'cause I got that heat ..yeah … I got my boy Scorpodra killin' the beat … (Complete Lyrics click here).
The song has a few pop culture references like Big Shaq’s viral song ‘Man’s Not Hot’ and the infamous Floyd Mayweather and Conor McGregor fight. T-Money from the 5 even takes shot at President Donald Trump, a trend that has become popular in hip-hop music in the last couple of years. His flow and lyricism are impressive and make him stand out from upcoming rappers such as Trippie Redd, Lil Pump, and Lil Xan. The song as a whole is as if Meek Mill teamed up with Skrillex for a new banger.
Scorpodra has Russian nationality. Born in Hurghada, Egypt, he spends most of his free time in the sea kitesurfing and wakeboarding. His love to sea, wind and waves inspires him for his great compositions.
T-Money from the 5 is a young rapper from Montreal, Canada. He has been rapping for over 2 years now. Besides his ambition for rapping he sings in a choir and loves playing American football, basketball and rugby.
They have both been making music for over a year. This duo is at the front of the new 2018 hip-hop wave. Are Scorpodra and T-Money from the 5 the next Dr. Dre and Eminem?
If you want to be up-to-date, make sure to follow the duo on social media and music platforms.
Scorpodra:                    facebook        soundcloud
T-Money from the 5:     facebook        soundcloud